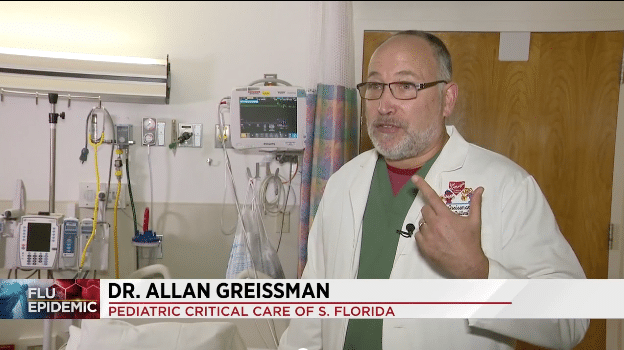 During this deadly flu season, the CDC is reporting 53 child deaths and is warning that we have not seen the worst of it yet. According to Dr. Greissman, the most common reason for a child with the flu to be admitted to PCCSF is high-grade fever or dehydration. Michael, like many patients who are admitted to PCCSF, began to suffer from “end-organ disease” as he fought off the flu.

Michael is a reminder of how dangerous this flu season is and the importance of getting the flu shot.

His mom said he first got a rash and complained of joint pain. Then he had a fever. Eventually, tests showed the toddler was infected with an aggressive form of the flu.

Greissman, a pediatric critical care specialist at Pediatric Critical Care of South Florida at the hospital, said Michael is recovering, but Dylan Winnick was not so lucky. The 12-year-old from West Palm Beach is among the 53 other children who have died of the flu around the nation. The Centers for Disease Control had bad news again Friday. The flu season has intensified and there are more weeks of suffering ahead.

One of every 14 visits to doctors and clinics were for fever, cough and other symptoms of the flu. That’s the highest level since the swine flu pandemic in 2009. Last week, 42 states reported high patient traffic for the flu, up from 39.

Hospital stays because of the flu also increased.