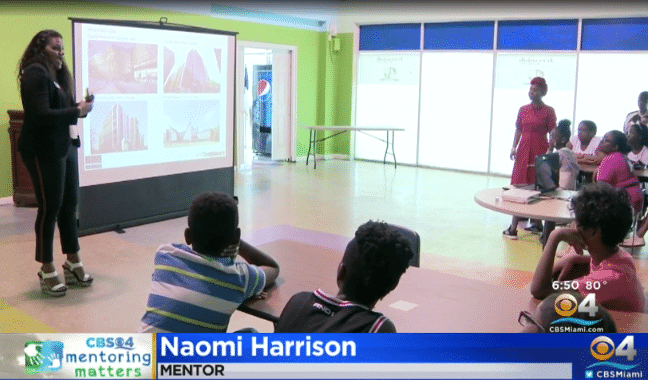 A program of Miami Center for Architecture and Design, Black Architects in the Making was launched by M.C. Harry & Associates to increase African American representation in architecture.

An architectural project manager at M.C. Harry & Associates, Naomi Harrison has already increased their representation through her mentorship of Bernise Muhammad, a BAM mom who went from being on the sidelines to now pursuing a career in architecture at Florida International University.

CBS 4 visited a recent BAM workshop where they learned more about Naomi and Bernise’s relationship and the work BAM is doing in the community.

A Miami woman is on a new career path in architecture thanks to a program designed for students.

Naomi Harrison is an architectural project manager at M C Harry & Associates, which created Black Architects in the Making, also known as BAM.

BAM was created to introduce and educate middle and high school students, primarily African American, to the world of architecture.

Harrison has been involved with BAM for several years, helping expose youngsters to architecture but also working to diversify the industry.

“One of the underrepresented in the industry is also females. 18-percent of architects are females but only .04-percent of the architects in the state identify as black female Americans,” explained Harrison.

Harrison along with other associates go into communities where African Americans live, work, and play and talk to them about architecture.

It was at one of the workshops where she met Bernise Muhammad, the parent of one of the students. For more information, visit CBS4