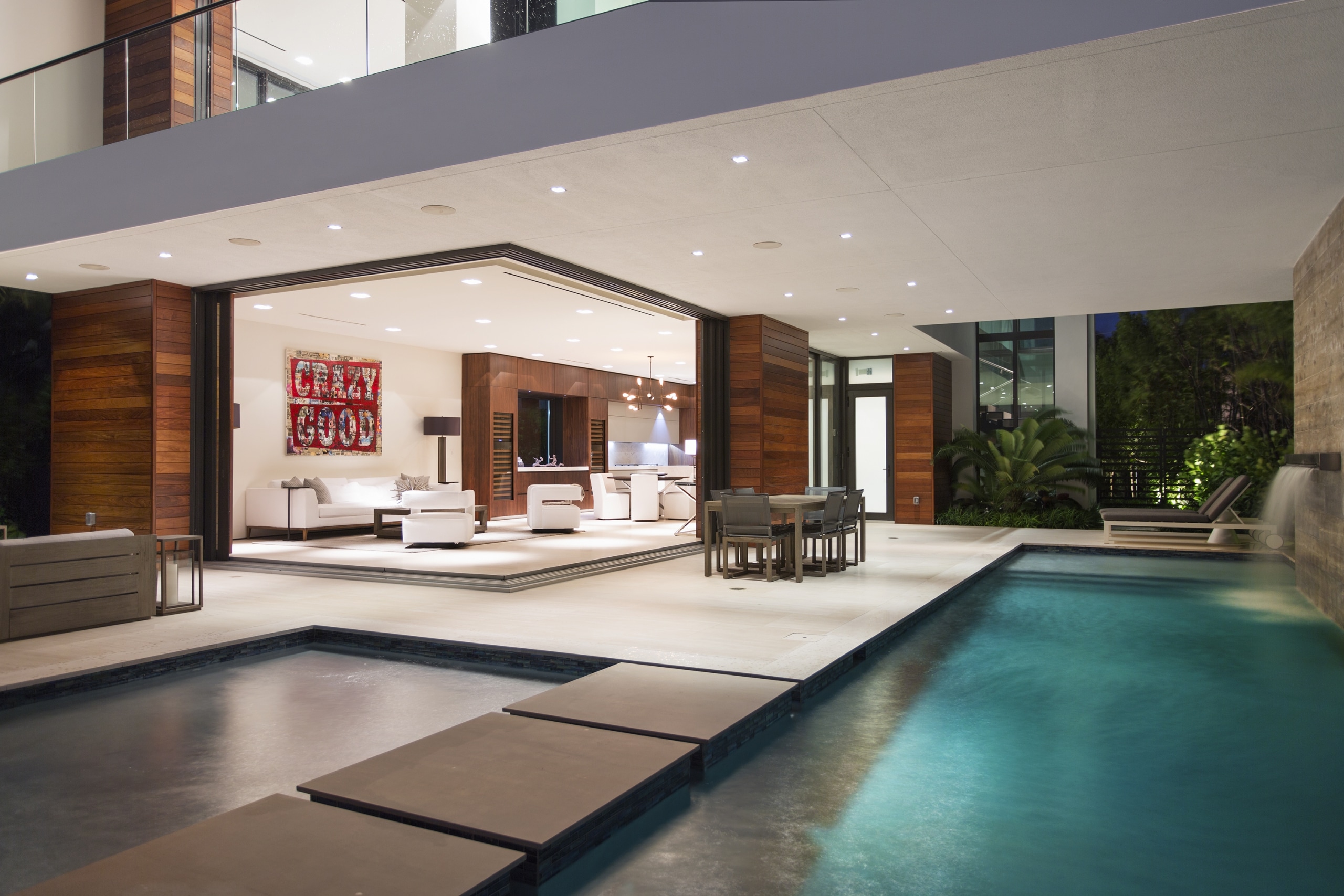 The latest issue of Tropic Magazine features a recently completed contemporary, waterfront home minutes away from Miami Beach designed by Choeff Levy Fischman. Located on Hibiscus Island, the residence features matte limestone floors, Cumaru wood and disappearing walls of glass that create a seamless transition between inside and out. With this property, Choeff Levy Fischman achieved an environmentally inspired, waterfront oasis that takes advantage of the natural aspects of its island location.

Turn north from the bustle of the MacArthur Causeway toward Palm Island and you enter an existence that might as well be half a continent away. Instead of the high-rises and cacophony that is South Beach, you cross a bridge into a world of twin islands, Palm and Hibiscus, dredged from nothing in the 1920s. These islands soon became home to both Al Capone and Lou Walters famous Latin Quarter nightclub. Boasting of one-road-on-and-off, these delicious bits of heaven have always attracted those who treasure Miami for its waterfront lifestyle. This held true for the first wave who built elegant, Mediterranean styled homes in the 1920s and still holds true today, although now, newcomers tend to prefer exceptional, contemporary homes.

One such home was recently completed under the watchful eye of its lead designer, Paul Fischman of Choeff Levy Fischman and might be best described as an environmentally inspired, waterfront sanctuary. At just under 6,000 square feet, the creation of this residence was no small feat, and always top of mind for Fischman was the home’s Hibiscus Island location. Materials such as matte limestone and Ipe wood appear again and again throughout the home. Lush, tropical foliage that surrounds the house seems to caress it at every turn, peeking in through windows by the kitchen or brushing up against a waterfall wall that splashes into the pool. This connection to nature is marvelous, but for us, what is of paramount importance about this home is its exceptional openness.

To attain this quality, Fischman specified stacking sliders for many rooms in the house, sliders that extend from floor to ceiling when closed, and hide away discreetly when opened. The entertaining rooms on the ground level face a courtyard in which a 590 square foot pool seems to slide out from under the shelter of the home’s sequestered courtyard. Upstairs, these same doors slide away in the master bedroom as well as the master bath, placing nothing between the home’s occupants and Biscayne Bay except for a warm breeze. These disappearing walls of glass create a seamless transition between inside and out, and the continuation of limestone flooring from inside to outside helps blur those lines as well.

On the main level, those covered patio accent walls sheathed in horizontal bands of Brazilian Cumaru wood act as the visual opposite to the board-formed concrete and stucco exterior. The swimming pool and separate shallow wading pool are separated by “floating” steps that lead out toward the bay. Here, the limestone platform ends, met by lawns that roll down toward the dock.

This house, of course, is outfitted with an energy efficient air conditioning system, but with the layout and connection to South Florida’s sub-tropical climate, the architect encourages owners – almost subliminally – to turn off the AC, open all the doors and revel in all that nature has to offer. The architect and his team pushed sustainability in this residence with features like a rainwater retention system that cleans and filters rainwater, storing it for use on the property. Low-E film was chosen to cover glazed surfaces, minimizing solar heat gain that in turn, reduces energy consumption. They’ve also installed a roof of high solar reflectivity, another way to minimize heat gain, always an issue in sun-drenched South Florida. In order to address sea level rise and potential storm surge, the home is lifted up on the site and set back over 20 feet from the dock and is protected by a sea wall almost three feet higher than what is currently required by code.

With this property, Fischman has succeeded in creating a sumptuous refuge literally minutes from the more urban aspects of Miami Beach, crafting a residence that takes great pleasure in the natural aspects of its island location. The island’s early 20th century developers would be proud.